We sat down with La Traviata director Sarah Giles to discuss her approach to Opera Queensland’s upcoming production of the Verdi classic.

What is your creative process when you are first approaching a new production?

I start by listening to the music. Preferably in one sitting, without interruption (which is impossible when you’re in a lockdown with small children – as was the case when Patrick first asked me to direct La Traviata for OQ.)

I got in touch with the wonderful Narelle at Opera Queensland who printed me a piano score. This is a condensed version of the music, the singers’ lines, and what the piano plays in rehearsals; it’s a core version of the music you can read. Once I have the piano score in front of me I begin to see how the music is constructed, the main motifs stand out, the timing of the music starts to imbed itself in my head and I usually start to see things in my imagination. I liken it to reverse sound design for a film; in film, a sound designer or composer watches the footage of the film and writes music for that footage. For opera it’s the opposite. The music is the starting point, so I write a sort of physical score of actions in my head that work with the music.

The music is everything. I have to find images, pictures, movements that either sit within the music, or consciously play against it. The music is incredibly restrictive – some ideas just don’t work within the constraints of the music, whether it be timing, or tone, or staging – which is hugely liberating as a creative approaching a new production. I had some terrific chats with our conductor Dane Lam early on, where we discussed the music, it’s history, certain aria’s that perplexed me and so on. It was the beginning of what has been a really fulfilling creative relationship.

While I’m delving into the music, I start to do research. I went back and re-read Lady of the Camelias by Dumas (my mum bought me a copy of a million years ago – she is a great opera lover and avid reader) and I started researching the period, prostitution, and courtesans.

I found a first-hand account of another sex worker from the era, Mogador, who remarkably had her diaries printed (scandalous at the time.) I started reading different translations of the libretto as well as looking at the original Italian and a literal translation and began working on a new translation of the libretto.

While I’m doing this research, my brilliant collaborator and friend Charles Davis (the set and costume designer for this production)) and I compile images and thoughts and over time an aesthetic begins to form.

I was certain I was always going to set the piece in the 1800’s. The story relies entirely on the strict rules of the society at that time to make sense. The moment you transpose it to now notions of shame, honour and duty no longer makes sense and the stakes, the story, the emotions begin to crumble.

The story has so much to say to us now about our gender politics and the society we live in. I find that examining the present through the prism of another era is extremely useful. It’s why we continue to watch stories from other era; we learn so much about present selves from our collective pasts.

What sets your version of La Traviata apart from the rest?

The seed story for La Traviata is by Alexandre Dumas, a novel titled “the Lady of the Camelias”, which follows a courtesan Marguerite. The story is told from the perspective of her lover, Armand, who tells the story of how they met and her ultimate death. The structure of the story is a conversation between two men – Armand telling Marguerite’s story to an unnamed third party, also a man. They discuss her life, her circumstances, her choices. The account is told entirely from their perspective and through the prism of their experience and interests.

Dumas wrote this story based on a real woman, Marie Duplessis, who Dumas himself had a relationship with in real life (whether he paid for sex with her, or whether it was something else I’m unsure.) This book was turned into a stage play, and Verdi and the librettist saw the stage production of the story and thought it would make a great story for a new opera.

In every circumstance, the story of Marie Duplessis is told from the male gaze, from the point of view of the men in her life. A viewpoint which reflects power, privilege, dominance and financial transaction. As such, her story is skewed from the start because it doesn’t take into consideration her point of view. I wanted to approach her story from a perspective that felt closer to the complexities of her situation, and less about how she is perceived through the eyes of men.

When I listen to the music, read the libretto, or reflect on Dumas’ novel, I’m struck by  how much complexity there is in Violetta’s life. That through sex work she worked her way out of abject poverty and made herself a life that had more security than she could have ever had on the streets. But the very thing that has liberated her is also the thing that is now her prison. She simply can’t escape.

I learnt in my research that once you had your name added to the register for prostitution (which was compulsory or you would be arrested) in this era in France, you could never get your name off it.  It was a life sentence; once a prostitute – always a prostitute.

I feel this speaks to our relationship to women in a contemporary setting. We tend to like our female characters, particularly in opera, as one thing. Either a mother or a whore. But heaven forbid those two adjectives combine. What would we do if we saw a sexualized mother on the stage? Fall over probably.

What bugs me is that her world is often portrayed as one that is entirely enjoyable, opulent and delightful. But that is utter nonsense to my mind. There is complexity in sex work and to deem it bad or good, moral or immoral, enjoyable or excruciating is too simplistic. There is complexity in the power dynamic between men and women. There is complexity in a society that won’t allow you to be more than one thing. There is a lot more going on in Violetta’s world that I wanted to explore. And so, I started to see another version of the production in my mind – where we saw more complexity and more sides of the story.

In this production I’m endlessly looking for moments to find more complexity and show the other side of Violetta’s story. To find a new way through. I want to look through each line, or lyric and find a different version of Violetta so that we can give her more humanity and more complexity. Lorina Gore, who plays Violetta in the Queensland Production, and I have been talking about reclaiming her from a feminist perspective. It feels hugely liberating.

Can you tell us more about the concept of public vs. private space in La Traviata?

In order to give the story more complexity, I wanted to create a space that allowed an audience to see things that weren’t necessarily the most obvious picture. Take our opening image for instance.

The first act is set in Violetta’s apartment. It’s 3am and there are still guests at her party. All the women are prostitutes, and all the men are society men, here to either get debauched, pay for sex, or get drunk and forget about their lives, families, jobs and wives. How can we create a space that can show this? We’ve designed a space that gives you a direct line of sight into both Violetta’s bedroom, a central living space, and a small private entrance hall.

Juxtaposed images of sexual consent and harassment started to appear in my mind. The possibility of giving Violetta a private space within which she wouldn’t have to perform for her guests felt immensely liberating. To be able to see the moments where she “switches on and off” for her guests felt useful and powerful.

Women performing for men intrigues me. Grace Tame is a prime example; the rage people felt when she wouldn’t “smile” speaks volumes. We expect women to make others comfortable, at least that is what women have learnt from the society we live in. Others comfort before your own. It’s a major sticking point in the opera for me, especially when Violetta puts the needs of Alfredo’s sister before her own. Dimity Shepherd, the brilliant opera singer and actress put it brilliantly when we were discussing La Traviata. She said that the incredibly problematic and flawed message we take away from the opera is that “good girls put themselves last.” An idea that is completely absurd and entirely problematic.

I liken it to this: a younger waitress in a posh restaurant. An older, wealthy customer grabs her bottom. Because of the inbuilt, unspoken power dynamic in their relationship, she has to laugh it off. She has to smile, to make him feel comfortable despite the fact he has done something wrong. Said waitress probably walks into a broom closet and silently screams, only to walk out of said broom closet moments later with an enormous smile on her face.

Performing is everything for Violetta. Her job is to make men think she adores them. Women are endlessly performing. This “performance” is also a neat meta theatrical thread that we pick up later at Flora’s party when we stage the Gypsies and the Matadors in a surprising way.

Tickets for La Traviata are now on sale now. 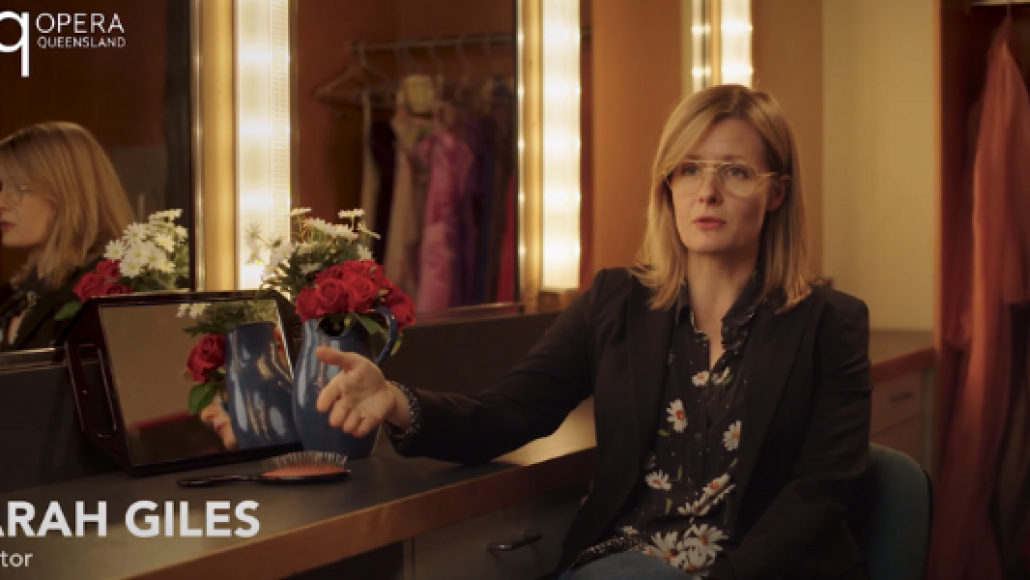 Director Sarah Giles shares the inspiration for her interpretation of La Traviata.