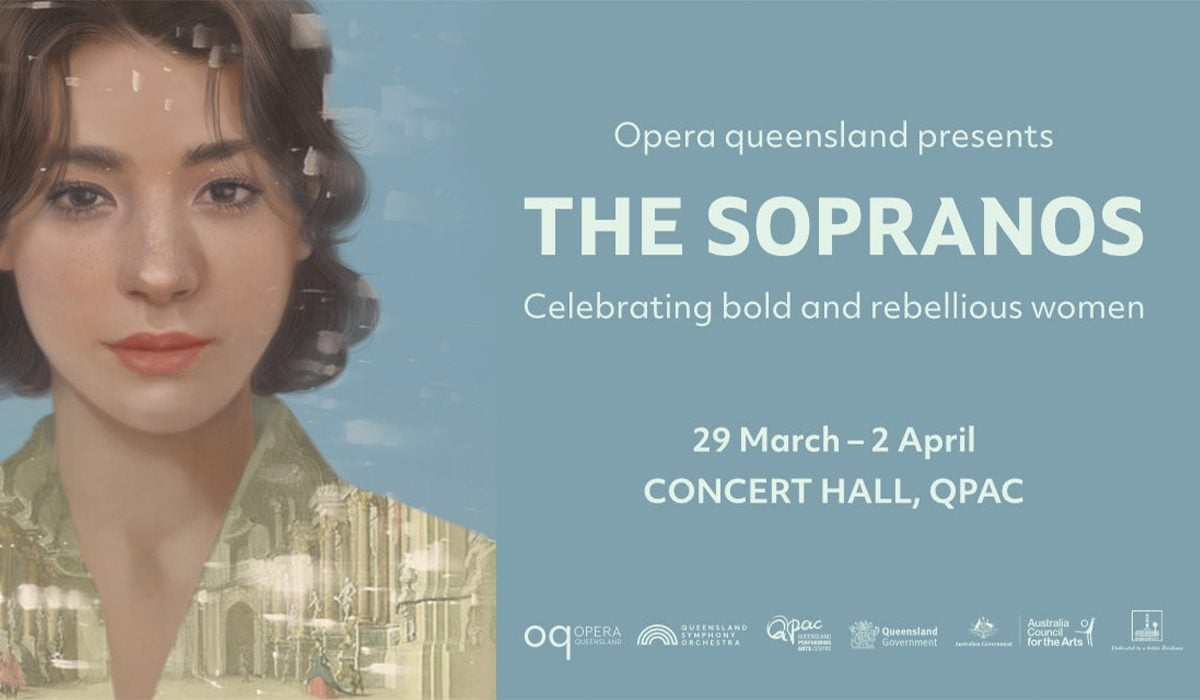 You've heard The Sopranos is coming, read what it's all about and what you can expect.

Bold and rebellious women are front and centre in Opera Queensland’s first mainstage production of 2022, the world premiere of The Sopranos at QPAC’s Concert Hall from 29 March to 2 April 2022.

The thrilling new work explores the representation and contribution of women throughout the history of opera.  Spanning opera’s beginnings in Florence to the present day, The Sopranos is conceived and brought to life by a powerhouse team of artists with women at the heart of the production team.

More than 90 artists and arts workers are bringing The Sopranos to the stage, including sopranos Lisa Harper-Brown, Leanne Kenneally, Sarah Crane and Eva Kong, baritone José Carbó and the Opera Queensland Chorus.

Opera Queensland Artistic Director Patrick Nolan said the new work was ambitious in scale and scope, responding to questions about the representation of women in opera. “Women have played such a central role in the history of opera but it’s a complex dynamic, their absence as composers, conductors and creators is a challenging conversation we can’t shy away from,” Mr Nolan said.

“The Sopranos addresses these challenges creating a space for audiences to engage with these ideas in an open and positive way.”

Mr Nolan said writer Sarah Holland-Batt had crafted a performance of great humanity, examining the dynamics of power and the ever-changing role of women in opera.

“Sarah has a special understanding of the relationship of language to music and the way song tells stories,” he said.

“To bring the vision and story to life, we have cast some of Australia’s finest opera singers to play a broad range of roles, covering a repertoire that spans the baroque to verismo to the contemporary including works by female composers and Australian composers.”

Minister for the Arts Leeanne Enoch said the Palaszczuk Government was supporting Opera Queensland in 2022 with additional investment of $500,000 to support the development of The Sopranos and the Festival of Outback Opera.

“Our additional support provides a foundation for the company to employ more local artists and further extend its regional reach to present more performances and initiatives,” Minister Enoch said.

“I am delighted Opera Queensland is continuing to innovate and tell new stories to wider audiences, with The Sopranos showcasing the tenacity, strength and determination of the women in opera who have enthralled audiences for centuries. This exciting new production will employ approximately 90 Queensland-based artists and arts workers, and is a true showcase of Queensland talent,” Ms Enoch said.

Sarah Holland-Batt said The Sopranos explored the idea that opera could be both a vehicle to celebrate the virtuosity of women artists at the same time as questioning and challenging the representations of women.

“The Sopranos is staged in two thematic parts. The first act addresses the challenges and crises women have faced in opera, the second examines their strength and tenacity in responding to those challenges,” Ms Holland-Batt said.

“While we explore the tension between female characters who suffer tragic or violent fates and those who rebel against their social constraints, what is consistent throughout is the tremendous power and virtuosity of the female voice.

“Our hope is for audiences to leave The Sopranos with a renewed appreciation for the enormous contributions women make in opera and perhaps with new perspective on those female characters that are so familiar to us.”

The repertoire has been chosen from across the history of opera, from Monteverdi right through to contemporary 21st Century Australian work written by women.

“Audiences will see well-known heroines like Carmen, Tosca, Dido and Turandot and works from lesser-known operas like Biographica by renowned Australian composer, Mary Finsterer, all presented through a contemporary lens.”

Following the Brisbane season, Opera Queensland will take The Sopranos on the road to regional and remote Queensland communities in May 2022 for a touring season. Cast, venues and dates for the regional tour will be released in early 2022 including details of the performances scheduled as part of the Festival of Outback Opera.

Opera Queensland delivers events within Queensland Health’s COVID Safe framework. If a performance is cancelled due to COVID, patrons will be offered a full refund or the opportunity to transfer to a new date.

The Sopranos is supported by Queensland Government through Arts Queensland.

Opera Queensland acknowledges the First Peoples of the Lands across Queensland, upon which we perform. We pay our respects to all of Queensland’s First Peoples, their ancestors and Elders, and to our shared future.