H Is For Harpsichord

A to Z of Opera:
With a huge variety of opera and classical music terms starting with H, today we turn our attention to an instrument that is seldom heard, though distinct in sound and appearance.

H Is For Harpsichord

The harpsichord is a stringed keyboard instrument, distinguished by strings that are plucked rather than struck as with a piano, its close relative. A harpsichord is characterised by an elongated wing shape, not unlike a grand piano or harp with the strings growing progressively longer to create bass notes.

Many composers, including George Friedrich Handel and Johann Sebastian Bach, have created music for this stunning baroque instrument. The harpsichord remained in popular use up to and throughout the 18th century as an essential component of chamber and orchestral music and opera.

In Australia, it was the passion of a schoolgirl that brought harpsichord music back to life in the late 1960s. Entranced with the unique sound, Mars McMillan left school immediately after hearing a record and started to build her own instrument. While she sought inspiration from newly released recordings, it is said that her main motivation was a strongly worded letter from a local musician who noted that her instrument would never be as good as an English made one, setting her on a course to become one of the greatest harpsichord makers in the world.

By the age of 22, after teaching herself the necessary woodwork skills, Mars McMillan was acknowledged as the only female maker included in the influential publication by Zuchermann, The Modern Harpsichord: Twentieth Century Instruments and their Makers. This talented woman also developed skills in visual arts and her paintings embellish some harpsichord soundboards with signature illustrations of Australian flora and fauna. 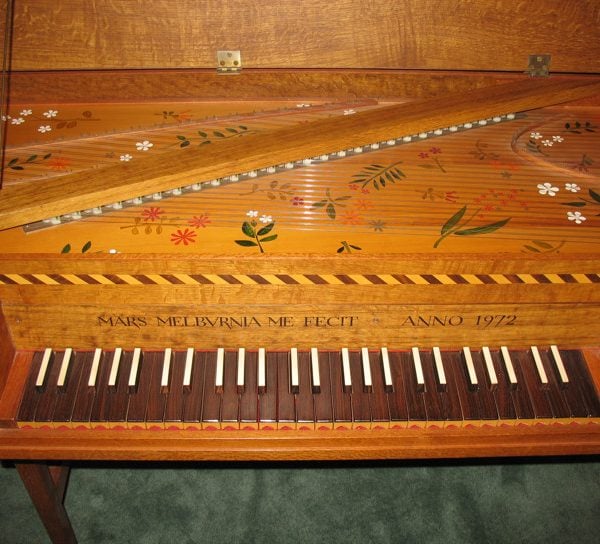 The extraordinary output of Mars McMillan fed into the creation of Melbourne’s Festival of Organ and Harpsichord, the only festival in the world for early music repertoire that celebrates the harpsichord.