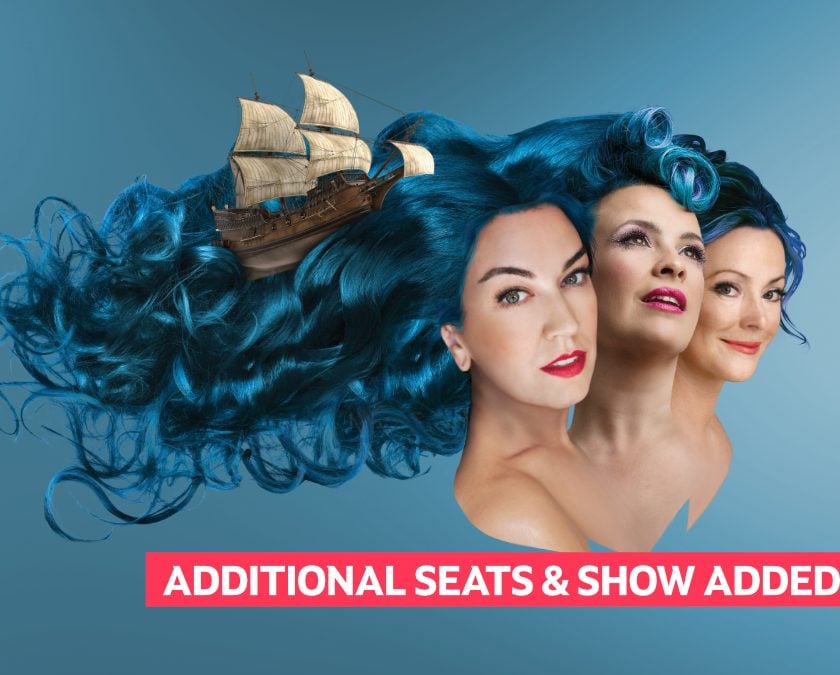 The Lorelei in German lore is a siren of distracting beauty said to sit atop a particular rock at the edge of the River Rhine, enchanting sailors with her alluring songs.

In her human form, Lore Lay was a beautiful woman waiting for her lover to return over the seas. Spurning all the advances of the local men, because she would not give herself to them, she was cruelly sentenced to give herself to God. On her way to serve her sentence in a remote nunnery, she comes upon the Lorelei rock and thinking she sees her lover in the Rhine, she throws herself into the water and to her death.

Transformed into a siren, her voice was said to pull men under her spell and onto the rocks.

In this modern interpretation of the myth, when the Lorelei fell from the cliff, she was split into three – Lorelei A, B and C who all embody a different version of her story.

The audience joins the Lorelei as passengers on a cruise ship travelling down the River Rhine, having heard their alluring call.

But questions are beginning to niggle our irresistible Sirens: are they tiring of singing sailors to their deaths and do the men really deserve to die?

Will they change their tune and their identity in the process?

Set sail with the Lorelei and watch their journey unfold. As the music shifts inspiration from tango to pop to latin with strong percussive sounds from the 12-piece orchestra, the creative team takes the Lorelei myth and uses it as a framework to explore what it means to be a woman under a patriarchal society’s gaze.

From concept to the stage, Lorelei is brought to life by a largely female creative team and cast.

Become a Season Subscriber and save. Book tickets to this performance as part of your 2021 Season Subscription and save up to 20%. More information.

In the event a performance is cancelled due to Covid-19, patrons will be offered a full refund.

Director’s Note – Sarah Giles on the story of Lorelei

The story behind the myth

Step behind the scenes with Lorelei

How Lorelei came to be

The impossible fashions of Lorelei

Your safety is our priority

See more of our events

Opera Queensland’s 40th anniversary gala is set to be the ultimate black-tie birthday celebration. ARTIST ANNOUNCEMENT To complement the spectac...

For soprano Eva Kong, each death scene she portrays on stage makes her feel more alive away from the spotlight. Eva presents a program of songs from D...